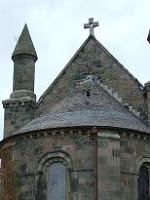 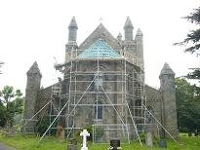 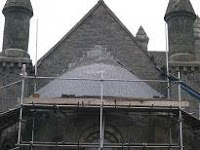 The curved roof at the front of the church was deteriorating rapidly when we bought Christ Church in 2003. It was the only roof never to have been re-slated since the church was built and it had begun to collapse allowing serious ingress of water. This was having a direct effect on the terracotta vaulted ceiling for which this church is particularly noted, making this a job of the up-most priority.
Once the scaffold was erected, the roof was stripped back, any rotten timbers were replaced, roofing felt was put down and battening nailed on. Then began the painstaking slow process of slating. Each slate had to be cut to size to produce a perfect curved finish
To re-roof this was a mammoth project spanning over two years. It was a very complicated procedure due to the fact that the roof is of an eccentric conical shape. This necessitated not only extremely complex carpentry but required every slate fitted to be hand shaped and bedded into position.
This was the toughest repair job that needed to be undertaken on the building so completing this part of the project is a huge boost to our confidence and morale.