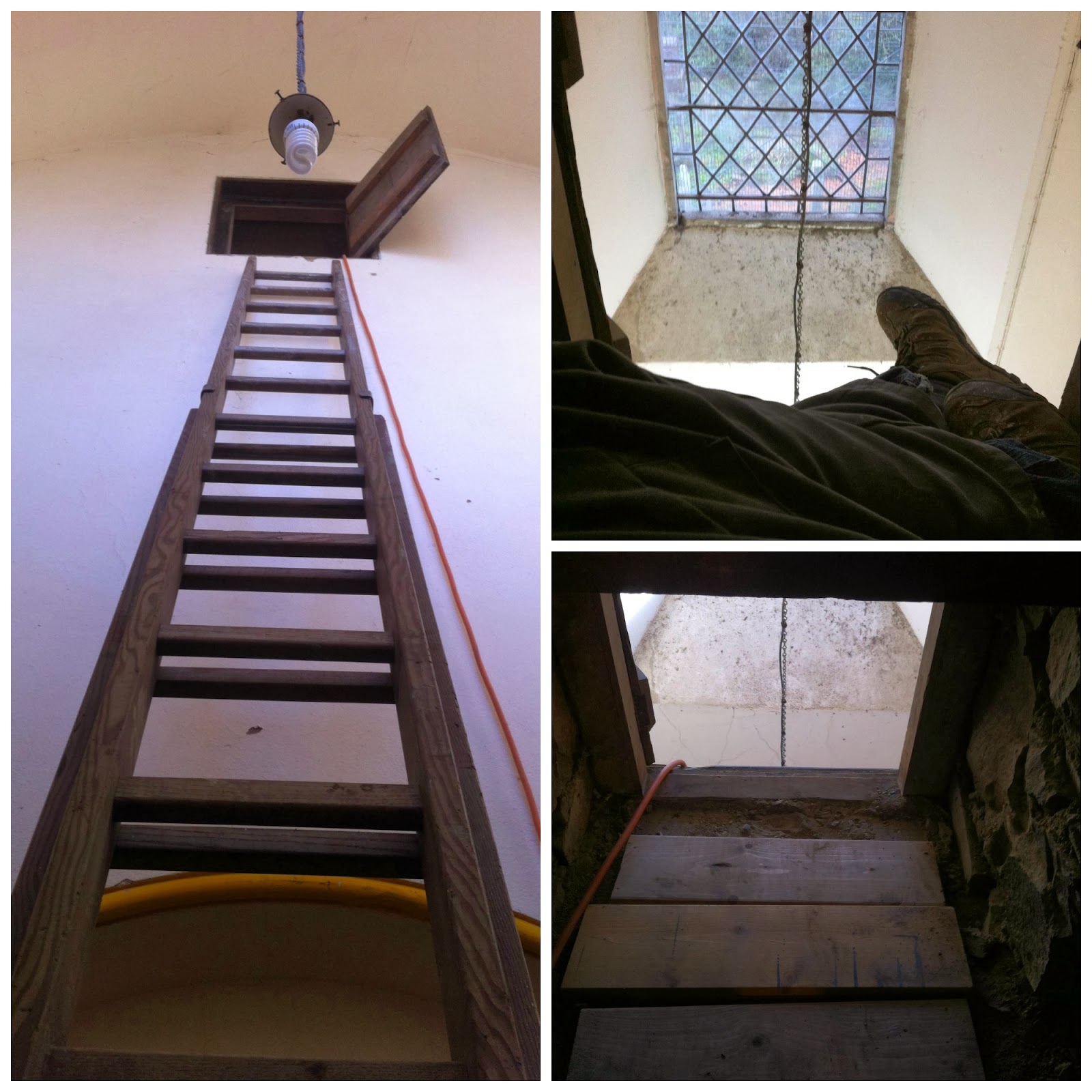 Once the euphoria of the completion of the roofing works on the south aisle roof waned, it was time to motivate ourselves to get it insulated (to comply with building regulations) and actually get it finished from the inside.
Over the years lime sarking had built up on the lath and plaster ceiling. Before insulating the roof, we decided it would be best to get all the unnecessary weight out of the roof. So clad in overalls, gloves and dust masks we set to, to somehow getting it all out of the tiny hatch door located very high up in the ‘side porch’.
Actually getting into the roof was the tricky bit. It was the first time I’d been up there, though Karl has done it several times over the years. How he ever did it, especially the first time on his own, I don’t know as it is extremely difficult! The hatch is through a very thick stone wall, so you have to climb up to the very top of the ladder, squeeze your top half through the hatch, lie on your stomach and lift your legs up horizontally – that is the horrible bit and where I lay in tears the first time, convinced I’d be stuck there indefinitely! The idea is to wiggle through the hatch until you can crawl into the roof space. I had to be pulled in! Thankfully, once you’ve mastered it, it does get easier. And yes, getting out is equally as nerve wracking! 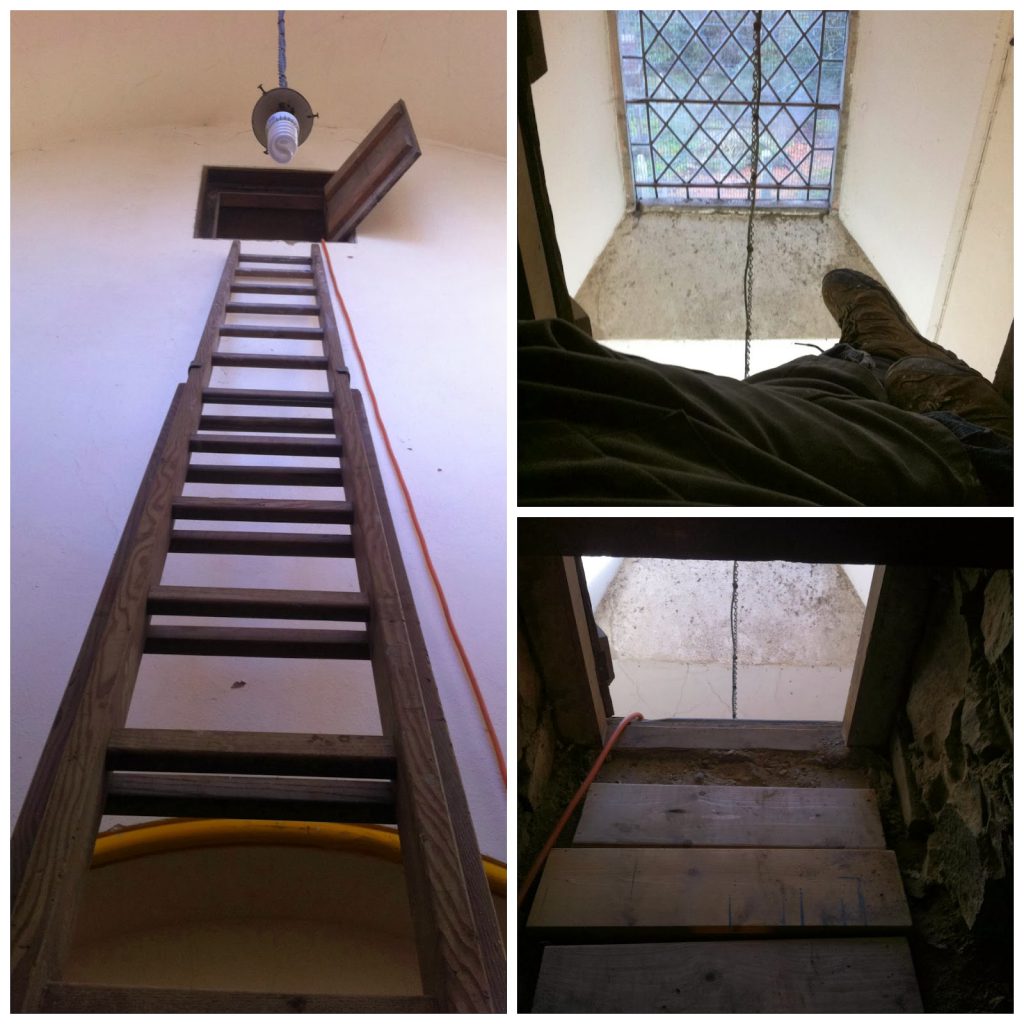 Once in, there is very little room to stand and you have to scrabble about taking care not to step off the rafters. It is fascinating to see how the roof is constructed and seeing the carpenters marks on the beams.

The lime sarking had to be scooped up and bagged, working in between the rafters. It was surprising how heavy the bags soon got and just how many we filled. Working in a cramped space, maneuvering heavy bags soon took its toll on our backs.

The bags were lowered down through the hatch (not as easy as it sounds) and loaded up into the trailer.
We did come across some interesting finds while we were up there. The roof had been repaired in the 1920’s and the roofers obviously liked a smoke! I do love the art deco designs on these old cigarette packets. The dark dry conditions up in the roof has preserved the packets really well. 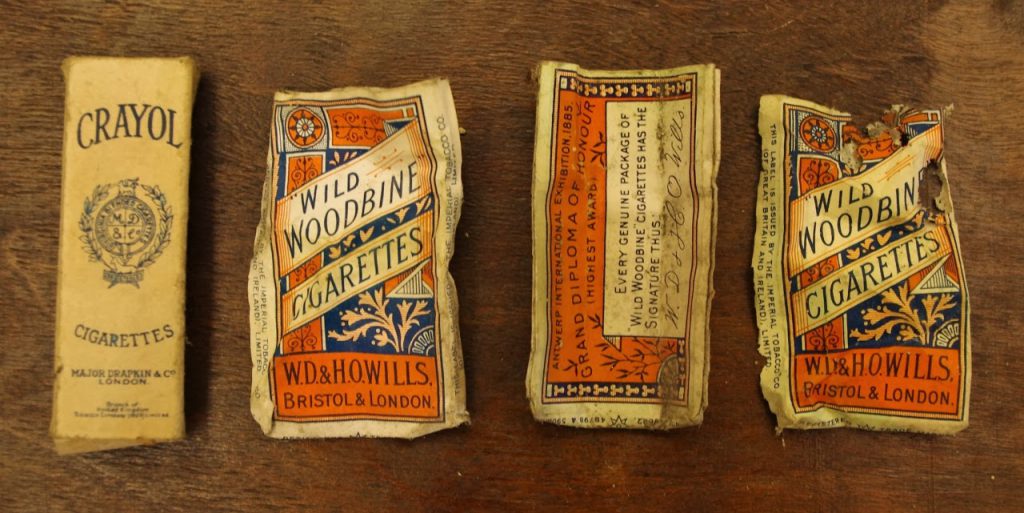 Karl also found a makeshift lamp. A handful of lime mortar had been put on a wooden beam and a candle pushed into it, providing light for past workmen. The mortar still shows the hand print of it’s maker. The candle has softened in the summer heat, but the wax dribbles still remain from when it was last lit. Fascinating!