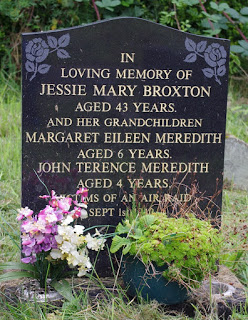 On this day, September 1st 1940, a family living north of Shrewsbury, suffered a direct hit from a German bomb during WWII, and the victims are buried in the graveyard here at Christ Church.

Jessie and her grandchildren had gone to bed, while William stayed downstairs ‘enjoying a final smoke before retiring’. Five minutes later the bomb struck the house.

Jessie, Margaret and William were killed outright, but miraculously William and the family dog were pulled from the wreckage suffering only with shock and a few cuts.

It is a very tragic story and we often give them a thought as we walk past their gravestone.

We would be very interested to hear from anyone with any more information relating to this. In particular we would like to know why they were buried in Welshpool.

We are grateful to ‘Shropshire War Memorials’ for the information on the ‘Armstrong Cottage Tragedy’ http://shropshirewarmemorials.blogspot.co.uk/2009/02/recent-weekend-provided-opportunity-for.html