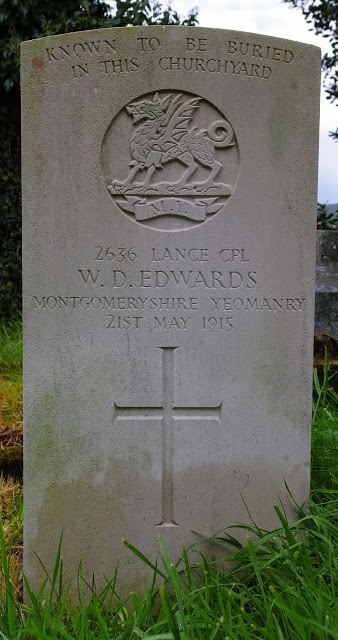 The memorial in the churchyard reads:
Known to be buried in this churchyard
2636 Lance Cpl
W. D. Edwards
Montgomeryshire Yeomanry
21st May 1915
A significant amount of WW1 military records were destroyed by fire during WW2 and it would appear that the records of William Edwards were amongst them, as very little information can be found. What we do know from the parish burial records is that he was 33 years old when he died and that he lived at Waterloo Shop on Salop Road, Welshpool.

William’s headstone has always been a point of interest in the churchyard for the inscription ‘Known to be buried in this churchyard’. The headstone was erected in 1961 by the Commonwealth War Graves Commission. On reading the letters exchanged between them and the parish church wardens, it transpires that no burial plan was kept of the churchyard. The church wardens assisted the CWGC to locate the grave by enquiring with the Montgomeryshire Yeomanry Comrades Association. One of the members recalled being a bearer at William’s funeral at Christ Church and it would appear that on this evidence alone, the headstone was erected here (interestingly the burial record appears to indicate that he is buried in St. Mary’s churchyard).The portland headstone is situated next to the drive, in a plot that is obviously too small for a burial and the headstone faces the church, rather than facing east.

William’s name does appear on the Montgomeryshire Yeomanry commemorative plaque in St. Mary’s Church. However, his name is not on the town war memorial.

We can only presume that William Edwards answered the call to arms in 1914 and died, perhaps of ill health, shortly afterwards. 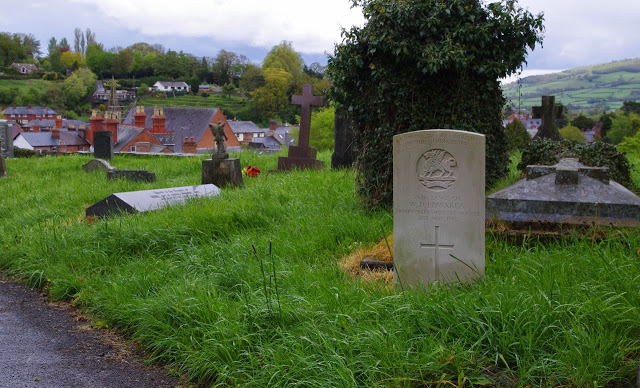 William’s story is on display as part of the ‘Remembering the Fallen of the Great War at Christ Church’ exhibition.