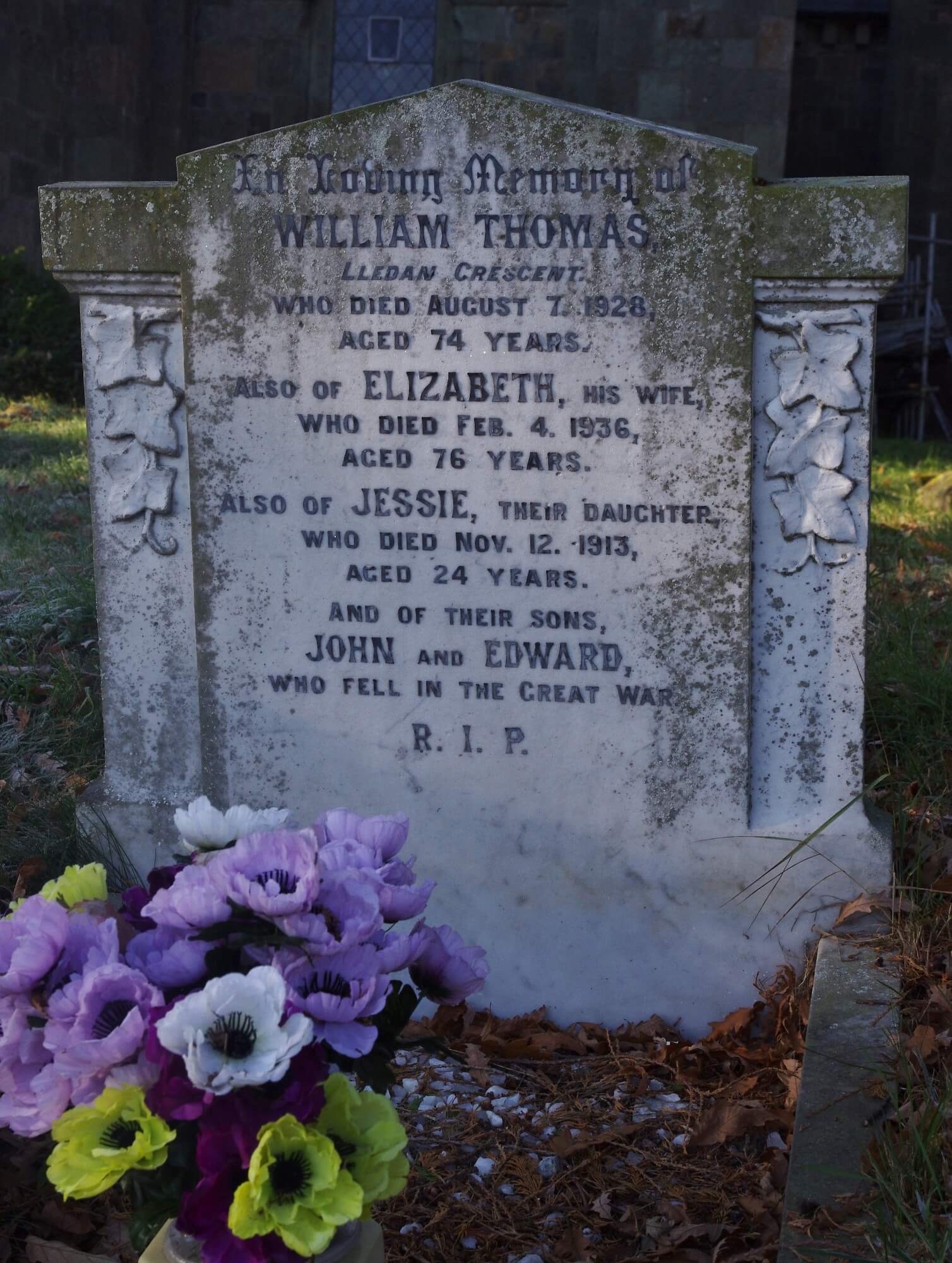 John Thomas
Gunner :: Royal Garrison Artillery
Died :: 10th December 1916 :: Balkans
The memorial in the churchyard reads:
‘And of their {William and Elizabeth} sons,
John and Edward,
Who fell in the Great War
RIP’
John Thomas was born in Welshpool on 20th August 1892. He was the 4th child to William and Elizabeth Thomas. They had 9 children but 3 died in infancy. The family lived at 47 Lledan Crescent on the ‘Back Road’. The house is no longer standing and the site is where the Library is today.
As a young man he was tall with brown eyes and dark brown hair. John followed his fathers footsteps and worked as a Labourer. At some point, around the ages of 19 or 20, John moved to the Crewe area, possibly seeking labouring work.
At the outbreak of war, just days before his 21st birthday, John enlisted at Crewe on 14th August 1914.
John was given the position of Gunner with the 13th Heavy Battery, Royal Garrison Artillery.
The Royal Garrison Artillery manned the heavy siege guns such as Howitzers with up to a 9″ bore and the ’60 pounder’ heavy field gun.

The 13th Heavy Battery were raised as part of Kitchener’s First New Army. The Division assembled on Salisbury Plain in August 1914.

In February 1915 the Division moved to Hampshire to complete their training. On 30th May the went to France as part of the 17th Heavy Brigade.

After a few months on the Western Front, they joined the 28th Division in October 1915 to embark for Greece.

The British Salonika Force was formed to deter Bulgaria from joining Germany and Austria – Hungary in attacking neighbouring Serbia.

John travelled from Marseilles to Alexandria, Egypt, landing on 22nd November. The Division then moved on to Salonika on 4th January 1916.

The British Salonika Force along with French troops planned to rush forward to the Serbian border. However travelling through mountainous terrain with few roads and bridges proved very slow and difficult. They were too late as the Central Powers and Bulgaria invaded Serbia.

The troops remained in Salonika, more for political reasons than military ones. They were involved in two major offensives in the area, but made little impact.

It was very difficult for the soldiers on the Salonika Front as they found themselves the ‘forgotten army’ in a remote corner of Europe. The biggest killer was disease, especially malaria.

We do not know what befell John, but he died on 10th December 1916. He is buried in the Salonika (Lembet Road)  Military Cemetery.

The Thomas family suffered more than most as they lost two sons during the Great War. John’s younger brother Edward fell a short time later. They are both remembered on the family tombstone here at Christ Church.

A detailed account of John’s story is on display as part of the ‘Remembering the Fallen of the Great War at Christ Church’ exhibition.

Previously published stories of WW1 memorials can be seen here.