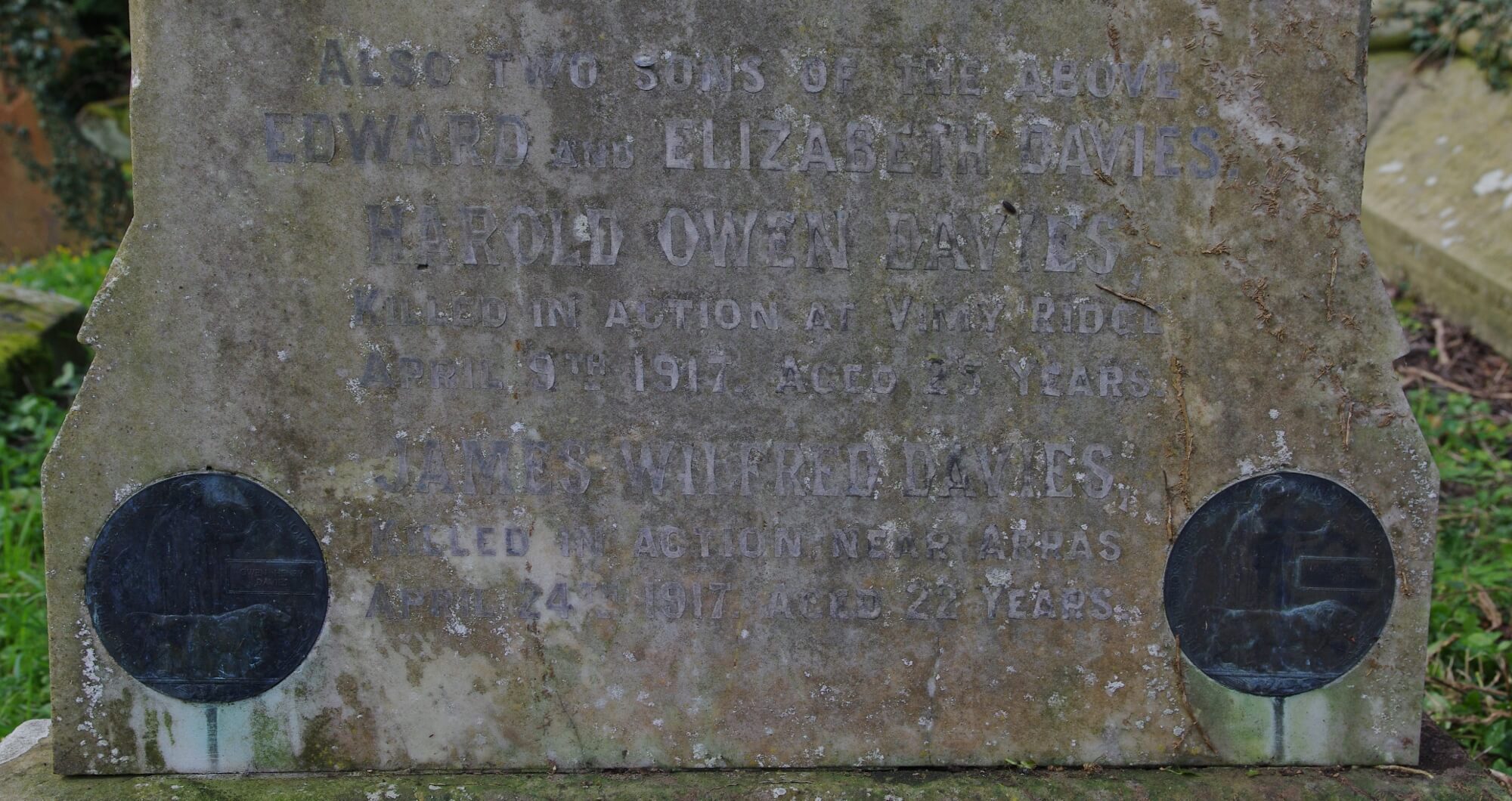 Killed in action at Vimy Ridge

Harold Owen Davies was born on 29th January 1892 in Welshpool to Edward and Mary Elizabeth Davies. Edward was a Mason and the family lived in a large house called Bryneglwys on Red Bank, Welshpool. The house is no longer standing as it was demolished to widen the road on the corner of Red Bank. Several houses built have been built on the site, which is named Bryneglwys.

Owen was one of 12 children, although his elder brother John died in infancy just days before Owen was born.

In 1911 at the age of 19 Owen was working as a ‘Telegraph Linesman’ and he was still living at Bryneglwys.

However, he left Welshpool and Wales and emigrated to Canada.

Owen settled in Revelstoke in British Columbia. He worked for the Canadian Pacific Railway as a Linesman. Revelstoke was a key point on the transcontinental line with divisional offices and depot situated there. Many employees of the C.P.R. settled in the growing town.

With the outbreak of war, Canada began a massive recruitment drive to send troops to Europe to assist the ‘motherland’.

In June 1915 the 54th Kootney Battalion of the Canadian Infantry Regiment was mobilised at Vernon. Along with many others from Revelstoke, Owen enlisted in the late summer of 1915 at Vernon.

After a few weeks at Camp Vernon, Owen along with his Battalion traveled to Halifax, Nova Scotia where he boarded the transporter liner ‘Saxonia’.

Interestingly the Saxonia was a sister ship to the Ivernia which was torpedoed on New Year’s Day 1917 (see George Henry Pryce’s story). They were built in 1899 as Atlantic emigration liners run by the Cunard company. They were used as troop transport ships during the First World War. The Saxonia was scrapped in 1925.

Owen left Canada on 22nd November and arrived in Plymouth on 2nd December 1915. The 54th Battalion were stationed at Bramshott Camp in Hampshire. This was a temporary military camp set up by the Canadian Army.

In August 1916 the 54th Battalion sailed to France, where they became part of the 4th Canadian Division, 11th Brigade. They were issued with steel helmets and gas masks and sent to Ypres on the Western Front to join the other Canadian Divisions. They were involved in several battles during the Battle of the Somme.

Owen was awarded the Military Medal which was a recognition of gallantry and devotion to duty when under fire during a battle on land.

In the Spring of 1917 the Canadian Army prepared to take Vimy Ridge with much detailed planning and training. Vimy Ridge was a 7km long ridge which gave the Germans a dominating view over Allied lines.

For the first time all four Canadian Divisions fought together. At 5.30am on 9th April the Canadian Army stormed the ridge. It was Easter Monday and the weather was cold with sleet and snow. Over 15,000 Canadian Infantry attacked the Germans all along the front. Canadian losses were huge that day. Owen was killed in action, as were over 100 of his comrades from the 54th Battalion.

After three more days of battle, the Canadian Army was victorious, securing their reputation as a highly effective force. However the cost was high with 3,598 Canadians killed and 7,000 wounded during the Battle of Vimy Ridge.

Owen is buried in the Canadian Cemetery No.2, Neuville-St. Vaast in France.

In Welshpool he is remembered on the Welshpool War Memorial and on a plaque inside Welshpool Methodist Church.

Tragedy was to befall the Davies family shortly after Owen’s death as another son, James Wilfred Davies, was to fall on the battlefields of France and Flanders.

A detailed account of Owen’s story is on display as part of the ‘Remembering the Fallen of the Great War at Christ Church’ exhibition.

We featured the story of Harold Owen Davies on a film created by Powys War Memorials Project.