Fred and Victor were keen to get involved in ‘Keep Welshpool Tidy Week’ launched by Welshpool Town Council. The idea is for everyone, individually or as a group, to go out and tidy up a little bit of Welshpool.

Nearly everyday we walk down the footpath leading to Chelsea Lane, and the boys were very enthusiastic to pick up all the rubbish that seems to build up there. Beer cans/bottles and take-away food cartons were the main rubbish types here. We moved on to Church Road which was littered with old silk/plastic flowers amongst other things. A lot of fake flowers have been dumped outside of the churchyard gate and then, presumably with the recent high winds, had blown down the road.

The churchyard was relatively litter free, however on closer inspection under trees and bushes a remarkable amount of rubbish had been purposefully put there. Cellophane wrappings from bunches of flowers, dog mess in bags (the boys were forbidden to remove those!), plastic bottles, broken glass jars,  plant pots and yes, yet more fake flowers. We have an old copy of the regulations that The Church in Wales set for the maintenance of churchyards, and silk/plastic flowers were forbidden, for this very reason – they are not biodegradable, they tend to blow away and litter the area, or they are cleared away, but not taken home to be disposed of or put into any bin. At a guess, fake flowers must be the nemesis of any churchwardens or groundsmen of churchyards. 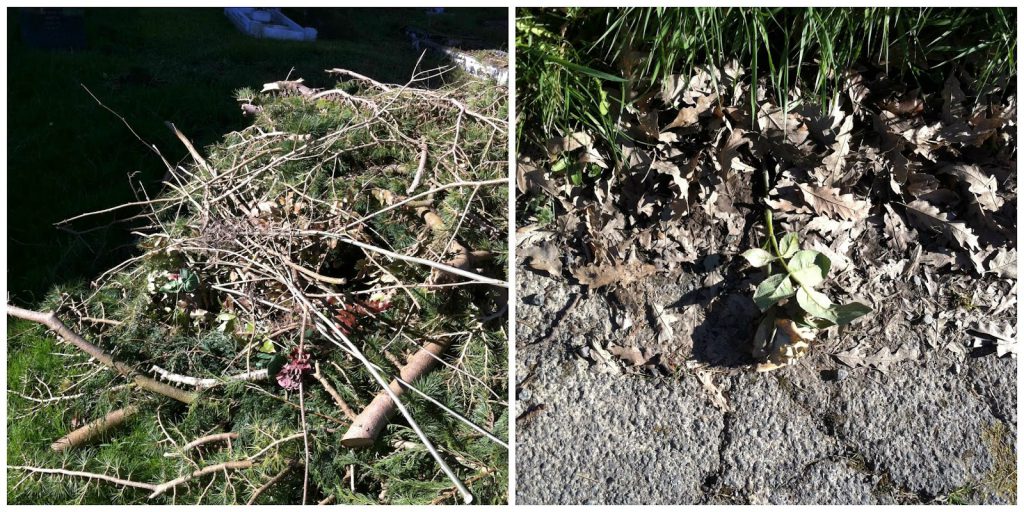 The boys picked them out and took all the rubbish to the nearby bins in Maesgwasted Cemetery – only a short walk away, so there really is no excuse not to use them.

After just an hour of effort by two small pairs of hands, this little part of Welshpool looks a lot tidier today. Fred and Victor were amazed at the amount of rubbish they found when it was all put together in a box (which was filled/emptied 3 times!). Hopefully the experience has helped them not to ever dump litter and to take good care of their environment.