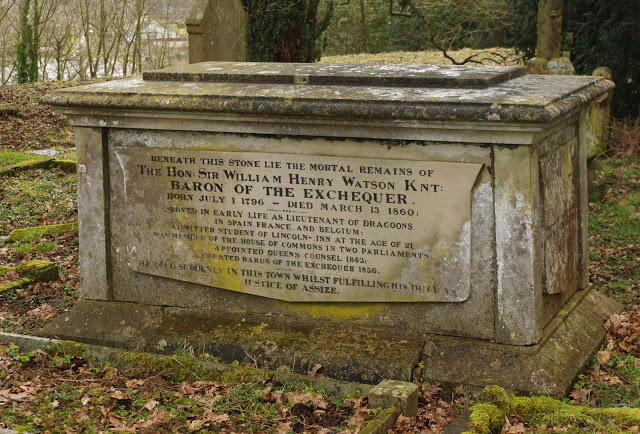 One of the most distinctive gravestones in the churchyard is of The Hon. Sir William Henry Watson, the Baron of the Exchequer. He was serving in Welshpool as a Justice of the Assize, when he was ‘seized with apoplexy’ and died on this day, March 13th, 1860.

He was born in Northumberland and had a very accomplished career, after being educated at the Royal Military College, Marlow. He witnessed the Battle of Waterloo whilst in the 6th Inniskilling Dragoons, which was then followed by a career in Parliament when he was elected as an MP for Kinsale and later, Hull. He became a QC and was well known for being ‘a judge possessed of clear head and strong mind’. In 1856 he became Baron of the Exchecquer. More can be read over at Wikipedia.
An inscription on the end of the gravestone gives us an idea of his character.

It begs the question as to why he was buried here in Welshpool, when the family would have had the funds necessary to bring him back home. Another inscription on the gravestone helps to explain this.

Interestingly, his wife, Anne, who had died many years before William, was the sister of Lord Armstrong of Cragside , the Victorian industrial pioneer and innovator. William and Anne’s grandson, William Henry Armstrong Fitzpatrick Watson inherited the title of 1st Baron Armstrong of Bamborough and Cragside, upon the death of Lord Armstrong, as can be seen on the Armstrong family tree.
It has been fascinating to find out more about William Watson and we were very surprised to discover such a close link to one of Britain’s most well known inventors. One day we’d really like to visit Cragside, now a National Trust property, to learn more about this exceptionally pioneering family.