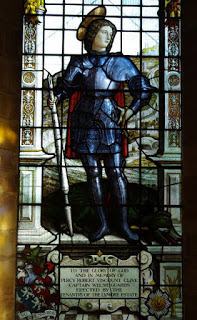 On this Remembrance Day, we remember Percy Robert, Viscount Clive, who died of wounds received at the Battle of the Somme in 1916. He was only 23, and was a Captain in the Welsh Guards. It was a devastating time for the Earl of Powis and his family, as well as for Welshpool, who lost many sons in World War I. We remember the sacrifice they made.
This weeks Image of the Week is of the stained glass window erected in memory of Percy Robert. He is buried in the churchyard by the South Door of Christ Church.