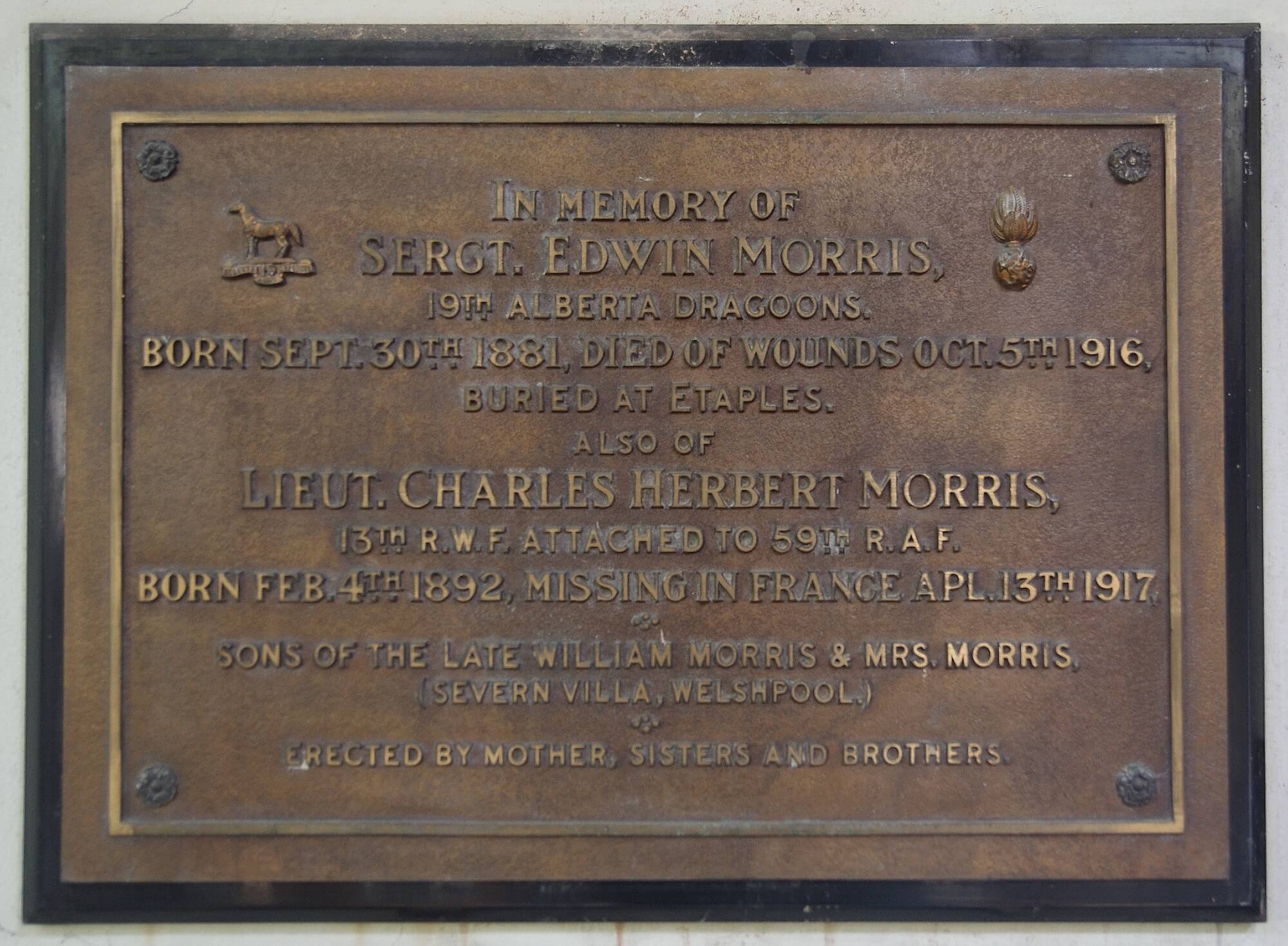 ‘Also of Edwin, his {William Morris} son, who gave his life for his country in France

Edwin Morris was born on 30th September 1881 in Welshpool. He was the 12th of 16 children to parents William and Jane Morris. His father William was one of the industrious Morris brothers, two of whom were the Foundry owners J & M Morris.

William was a draper who had a shop in Broad Street (where the Pinewood Cafe is today). He also owned a flannel mill alongside the canal, just off Salop Road.

The large Morris family lived in Severn Villa, on the other side of the canal to the flannel mill. This would have been a substantial house to accommodate the family and their servants. Sadly the house no longer stands and all that remains is a stone wall and evidence of an entrance to the property flanking the canal.

The 1901 census lists 19 year old Edwin as living at Severn Villa, along with his parents and 9 brothers and sisters and working as a mechanical engineer.

Some time after this Edwin emigrated to Canada, possibly settling in Alberta working as a ‘saw-fitter’. Edwin enlists with the 19th Alberta Dragoons, a militia cavalry unit created in 1908 and based in Edmonton.

On 1st October 1914, Edwin and the 1st Canadian Cavalry Division embarked on HMTS Arcadian, for the two week voyage to England. They arrived at Plymouth on 15th October. They travelled by train to Salisbury Plain where they trained for 4 months, mostly in deep mud as it was an exceptionally wet winter.

The Division left Salisbury Plain and departed England for France on 12th February 1915. The 1st Canadian Cavalry Division remained in France and Flanders for the duration of the war and took part in most of the major battles in that area.

It was here that Edwin died on 5th October 1916, just days after his 35th birthday.

Situated near the south door inside Christ Church is a brass plaque erected by Edwin’s Mother, sisters and brothers in memory of both Edwin and his brother Charles who also died in The Great War a short time later.

A detailed account of Edwin’s story is on display as part of the ‘Remembering the Fallen of the Great War at Christ Church’ exhibition.